Dr. Kathryn Ladano is known for her unique sounds as one of Canada’s foremost bass clarinetists. As a specialist of contemporary music and free improvisation, Ladano is an in-demand collaborator, soloist, and educator. She has performed as a soloist and chamber musician across Canada and abroad and has been an integral part of many different creative projects and endeavours. Kathryn holds a PhD from York University, a masters degree in bass clarinet performance from the University of Calgary and an Honours Bachelor of Arts degree in music from the University of Waterloo. She has performed with internationally known musicians and improvisers such as Douglas Ewart, Ed Sarath, Michael Jefry Stevens, Stephen Nachmanovitch, and Dong-Won Kim.

Kathryn is heavily involved in both educational and creative work. She is currently the Artistic Director of NUMUS concerts, the Director of ICE (Improvisation Concerts Ensemble) and instructor of improvisation studio at Wilfrid Laurier University, and the bass clarinet instructor at the University of Waterloo. As an enthusiast of improvisation in the classroom and bass clarinet repertoire, she has guest lectured in university classes and conducted workshops across Canada for both teachers and students.

Currently, Kathryn performs as a soloist and in a number of ensembles that specialize in new music and free improvisation such as Stealth; her duo with famed TorQ percussionist, Richard Burrows. The duo released their debut CD, “…listen”, in the summer of 2015. Kathryn has also released two solo albums, “Open” (2010) and “Masked” (2019), all of which were made possible by funding from the Region of Waterloo Arts Fund. Kathryn was also the 2015 winner of the Cook Homes Music Award at the Waterloo Region Arts Awards. Kathryn’s research interests include improvisation pedagogy and the use of free improvisation as therapy for musicians with various anxieties.

Veda Hingert-McDonald is a violinist and composer currently based in Kitchener Ontario. Drawn to story just as much as sound, Veda’s performance of both new and standard repertoire aims to balance personal connection with tradition, and her composition work often draws on narrative and programmatic elements to explore themes of nature and questions she has about the world around her. Recently completing a Bachelor of Music at Wilfrid Laurier University, Veda is excited to be starting a Masters of Music at Colorado University. 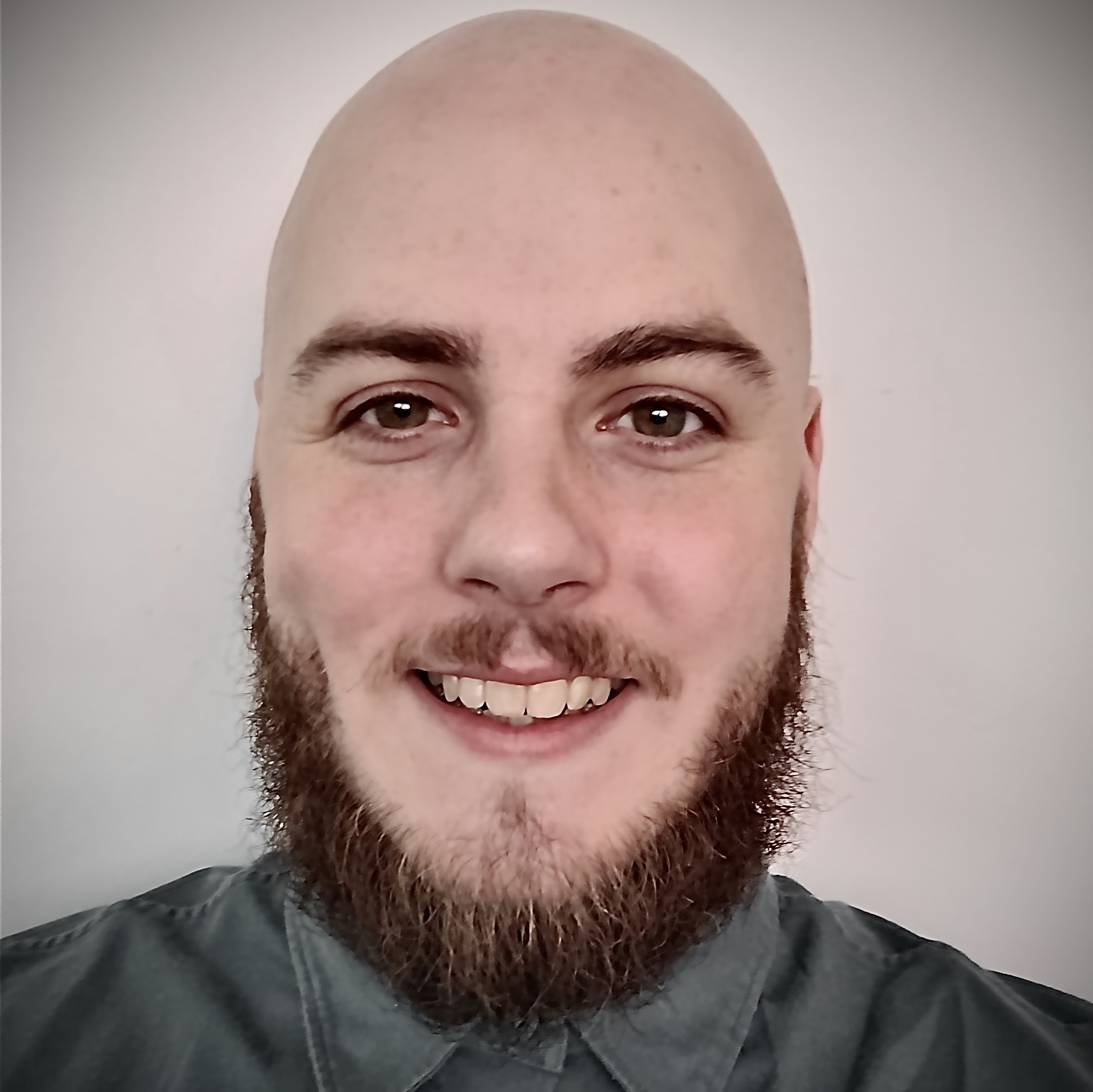 Max Lindsay is a Kitchener-Waterloo-based percussionist who was born and raised in Oshawa, Ontario. A recent Graduate of Wilfrid Laurier University with an Honours BMus in percussion performance; Max has worked with an abundance of community/professional organizations around the Tri-City area including the Stratford Symphony Orchestra, Cambridge Symphony Orchestra, Kitchener-Waterloo Chamber Orchestra, and Kitchener Waterloo Symphony Orchestra, The Yacht Club, KW Music Room, the Grand Philharmonic Choir, NUMUS, and Open Ears. Max has attended the TorQ Percussion seminar in Stratford, Ontario, and at LAMP in Lunenburg, Nova Scotia. He has also participated in LAMP’s annual Composition academy to workshop composition students’ pieces. In 2018, he competed and won WLU’s annual concerto competition and came in second for the Kitchener-Waterloo Chamber Orchestra concerto competition featuring Emmanuel Sejourne’s Marimba Concerto for Marimba and String Orchestra. While establishing himself as both a solo and chamber musician in Kitchener-Waterloo, Max also actively works to engage the Oshawa arts community through collaborations using a variety of multi-disciplinary arts. In addition, he has worked with organizations such as Media Art Design Youth Durham to organize events that provide a platform for local talents of all varieties. His interest in collaborative projects stemmed from working on the large-scale community-based productions of R. Murray Schafer such as his outdoor opera The Spirit Garden, and in the revival of his opus Apocolypsis. During his study of primarily Western Classical music, Max discovered a profound interest in Balinese Gamelan – joining the University of Waterloo’s Conrad Grebel Gamelan Ensemble in 2019. He also discovered a passion for contemporary improvisation while working with the WLU’s Improviser Composers Ensemble (ICE) under the direction of Dr. Kathryn Ladano. These two experiences widened his understanding of possibilities as a percussionist and a musician in the 21st Century. 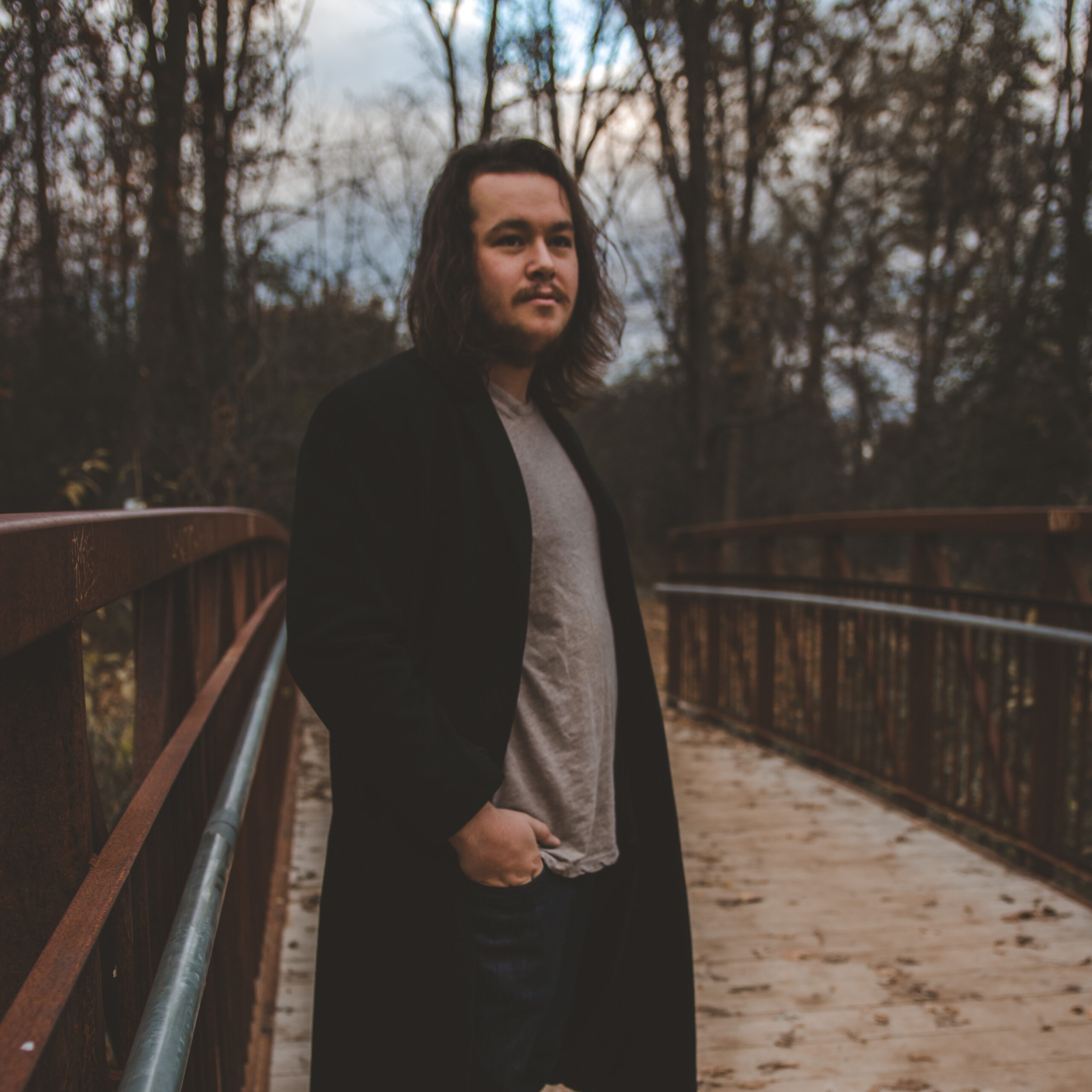 Myke Phillips is a percussionist and audio engineer based in Waterloo, Ontario. Known for his versatility as a player he is often seen performing improvisatory, and contemporary music, as well as in popular idioms such as rock or jazz. He studied at Wilfrid Laurier University under the tutelage of percussionist Dave Campion and prolific improviser with Dr. Kathryn Ladano. Myke has long had a passion for incorporating electronics into his work and continues to explore the manipulation of acoustic sounds through digital process, as both a performer and audio engineer. 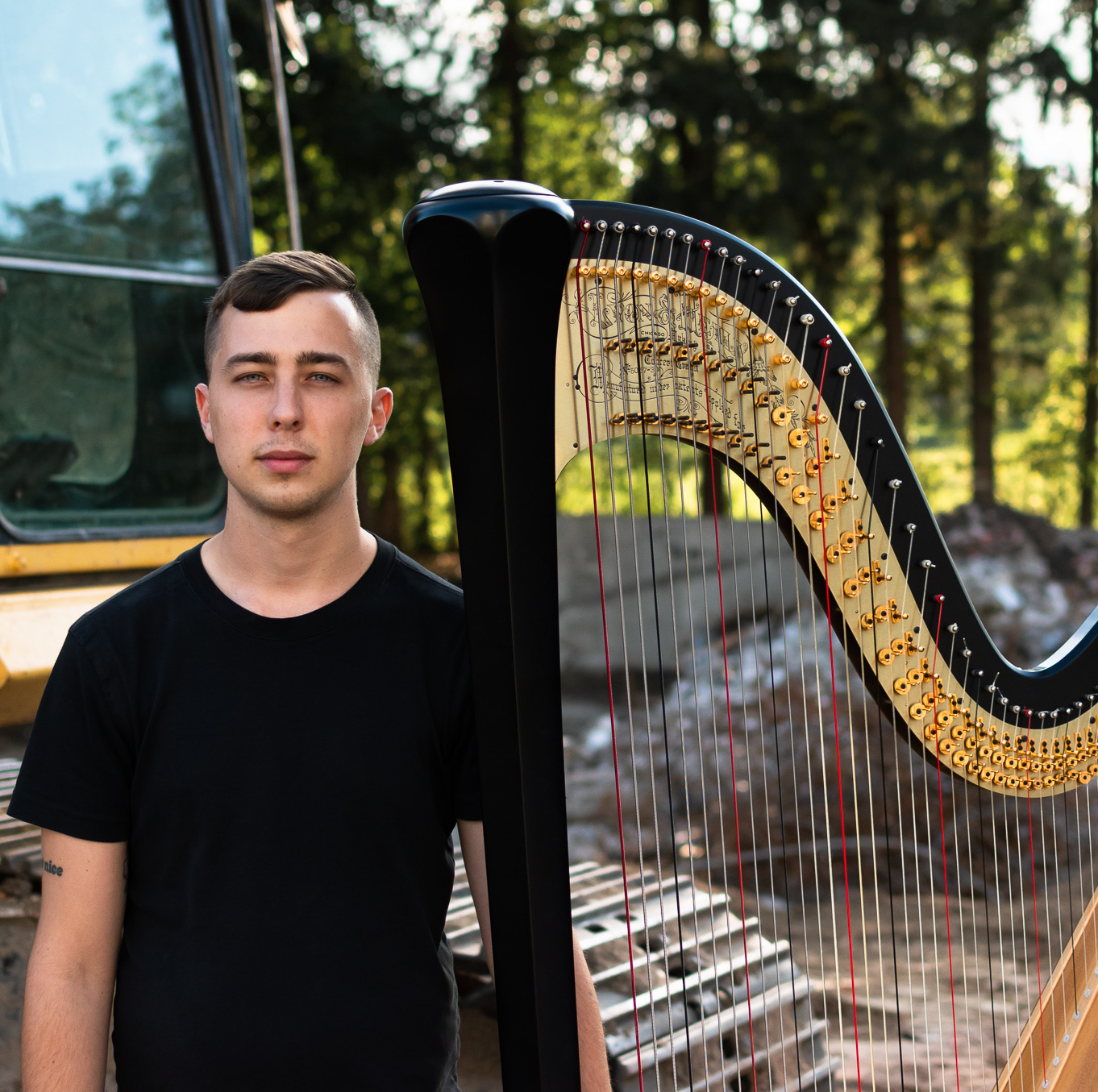 Andrew Rinehart is first and foremost a creator. Known for his mystical use of electronics, trance inducing melodies, and even inventing machines with which to play his works, the word “harpist” is insufficient alone to describe him. A self-described multimedia harpist who dabbles in coding, 3D-printing, and filmmaking, it is difficult to affix one label to Andrew as an artist. Currently based in Waterloo, Ontario, Andrew graduated with his BMus from Wilfrid Laurier University in 2021.  Under the tutelage of the eminent harp player Sharlene Wallace, composer and electronic musician Cam McKittrick, and improviser Dr. Kathryn Ladano, his studies cumulated in his first full length concert film ‘This Garden’ which incorporates imagery of the Canadian landscape with the work of notable collaborator and poet Eli Sokoloff Harris, a custom-built music box, and of course, the harp. 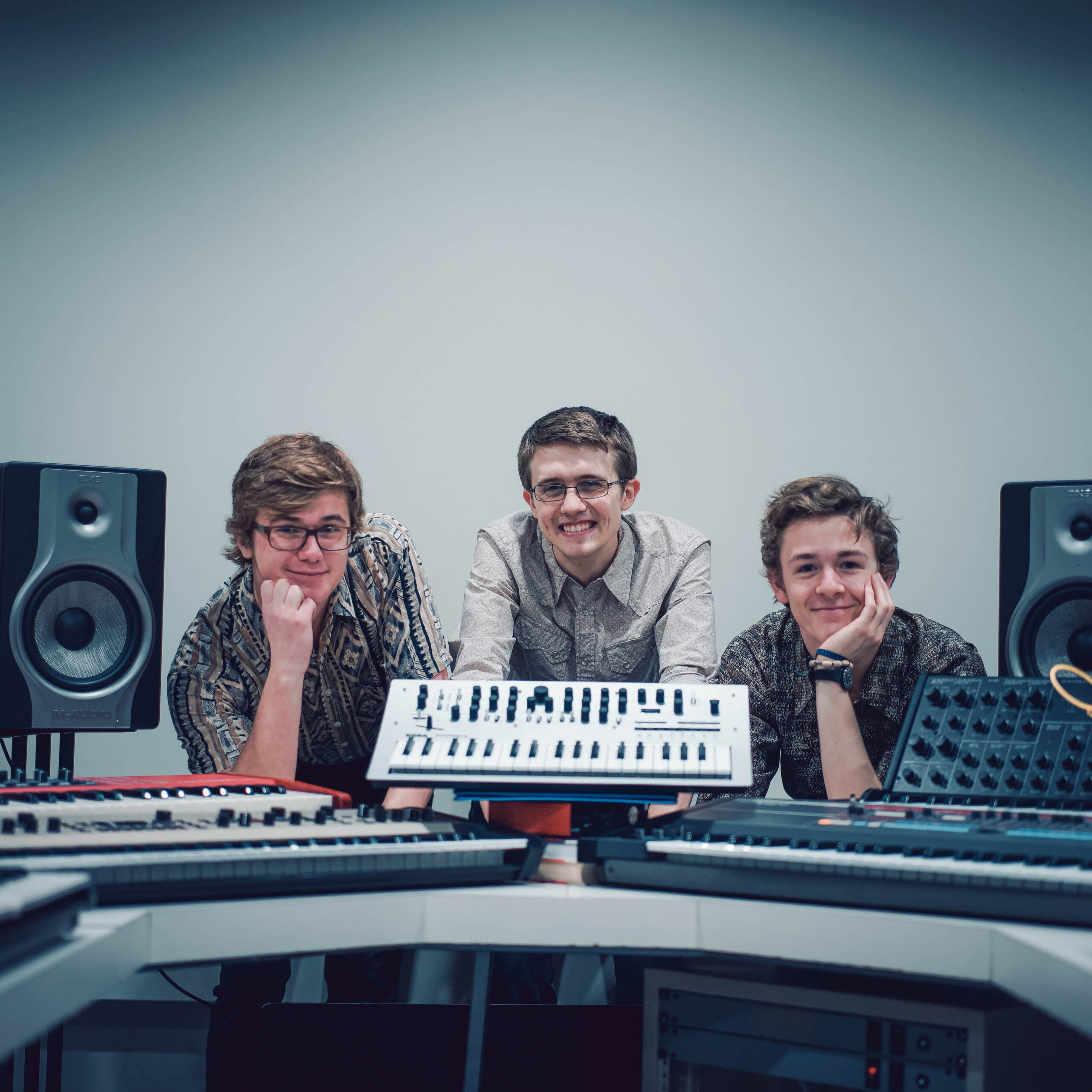 The Seagram Synth Ensemble is a Kitchener-based trio of electronic artists with a computer-free passion for synthesizers.  Legend has it that these fellas and their circuitry take audiences on an interstellar odyssey through space and time.  Using contemporary, vintage, and homemade synthesizers, they create soundtracks you never knew you loved.  Come catch a glimpse of the Seagram Synth Ensemble and realize your audio-visual fantasies.